The makers of the VW Beetle and famous “Volksiebus” kombi may soon manufacture an innovative new ventilator – to help save Covid-19 lives.

And the building skills by South Africa and Volkswagen South Africa (VWSA) have shown to be every bit as good as the famously fast hospital-builders in China.

These were among the announcements on Tuesday from national Health Minister Zweli Mkhize in the Eastern Cape, upon opening the new 3 300-bed field hospital in Nelson Mandela Bay.

No more information was offered on the new ventilator – but the technology could be part of an oxygen supply to the thousands of patients in the new field hospital.

“We are also very pleased to have had a conversation with VW on manufacturing non-invasive devices to deliver oxygen to patients who need assistance. We look forward to these developments because the guidelines for critical care are indicating that less invasive ventilation confers better outcomes,” said Mkhize. 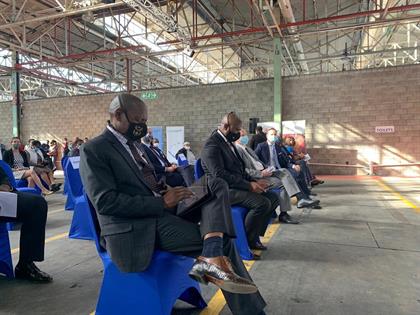 Mkhize heaped praise on the construction and project management teams who built the field hospital “in record time”. He admitted “many people doubted if we could build this in a matter of weeks” – as had famously been achieved in China, early in the international pandemic.

And on Tuesday, he was able to officially open the facility.

This spirit of dedication, in which the vast facility was built, was reflected in the name of the hospital, he said: the Reverend Dr Elizabeth Mamisa Chabula-Nxiweni Field Hospital – after the doctor who has led the fight to reduce initiation deaths in the province.

Mkhize said: “South Africa has a long and rich history with Germany” and the new facility was “a mark of friendship and solidarity” – “to save humanity”.

“A great deal of thought has gone into the project,” Mkhize said.

He had been particularly impressed by the exceptional quality of the project management, which government hoped to learn from.

We thank VW as a company, the provincial government, the mayor, the premier, and the provincial health department for the work they have done in making this facility available.#ECVisit23June pic.twitter.com/mlaWRHr4Ai

The new plant would also feature more capacity to assist the state laboratory services with testing – another contribution by VWSA.

These increases in capacity were just in time, ahead of “the raging storm” coming South Africa’s way, Mkhize warned.

He said the lockdown had been in anticipation of “a devastating and decimating storm”, and South Africa was now “riding into the storm”.

WATCH | Coronavirus through the eyes of South African children

To help survive this “storm”, 6 500 more professionals had been recruited into the state healthcare army. This included 6 100 nurses, 194 doctors and dozens of paramedics.

Retired healthcare workers had also been brought on board.

Our testing strategy has enabled us to complete over 1,2 million tests in just under 4 months. We have also reduced the backlog from 101 000 to 46 493. Our testing capacity ranks among the best in the world.#ECVisit23June

Once their particular circumstances had been assessed, they would be deployed appropriately.

Mkhize warned South Africans to hunker down to weather the “storm”.

READ HERE | Covid-19: ‘Nothing could have prepared us to deal with this virus’ – Dlamini-Zuma tells NCOP

“We need to make the message very strong: We can’t take the foot off the pedal,” Mkhize urged.

Chabula-Nxiweni said she hoped every patient who entered the new hospital walked out healthy.