Lungile Tom was the life of his home.

“He was the heart of this family. He was love personified,” his grieving wife, Nandipha, told News24.

“There was always happiness and noise wherever he was. Even when it was just him and the kids, it sounded like there were 12 people around.”

The noise stopped on 13 May.

Tom, 45, a cameraman for eNCA, died of Covid-19 in a private hospital in Bellville, Cape Town.

He had been on a ventilator and sedated for two days, but never woke up again. A week before his death, he had started feeling under the weather and began self-medicating that Friday.

On the Sunday, he complained of being unable to breathe and was transported by ambulance to hospital.

He texted his wife the next day to confirm that he had tested positive for Covid-19.

“We had a video call that Monday and he was joking and laughing like he usually does. He told me they would be putting him on a ventilator and sedating him. He was hopeful that it would make him feel better.”

That was the last conversation she would have with her husband.

“I kept calling and calling. The hospital staff later told me that he was not responding, that they will keep me updated. But nothing changed.

“The Wednesday morning, the hospital called and told me to come in. He wasn’t waking up. 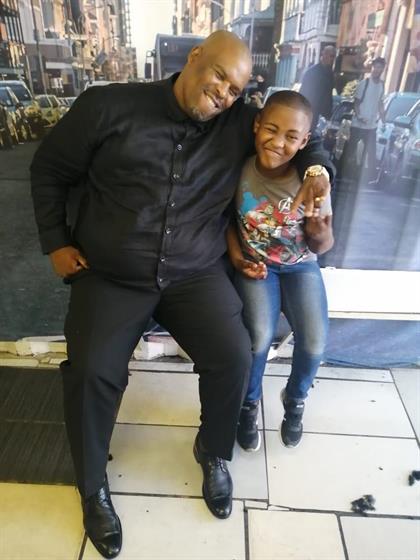 Lungile Tom and his son Imivuyo.

Dressed in full personal protective equipment, she stared at her husband in disbelief after being asked to identify his body.

“I wanted to shake him and wake him back up,” she said,

“When the house was too quiet, he would always jump out from somewhere and scare me. It felt like this could be one of his pranks. He was always full of jokes.”

Nandipha and Lungile had been married for 11 years.

Lungile, originally from East London, has a grown son as well as a 10-year-old boy with his wife.

His funeral was impersonal, Nandipha said, but she understood why it had to be that way.

“But it is difficult to explain to a 10-year-old child why they cannot open the box for him to see his dad, or to put into words that daddy is wrapped inside. I felt detached,” she said. Lungile Tom was known for his snappy dress.sense.

“Even when we couldn’t go to hospital to see or visit him… It feels like you’re throwing someone away.”

Media workers are categorised as essential service workers and continued working throughout the pandemic. Virtual interviews and meetings have replaced many contact interviews, but many still went into the field to report.

Nandipha is convinced her husband contracted the virus while covering a story.

She had also been infected, but was recently retested. Her results were inconclusive.

Their children had not contracted the virus.

Lungile’s former colleague, talk show host Lester Kiewit, described the cameraman with the snappy dress sense as a “tender, older-brother figure, whose physical size made you feel safe and secure, no matter where we were reporting from”.

Behind the camera for my very first live crossing at Parliament. Always with words of encouragement. You loved to snap pics, but I got these last ones of you on the precinct just before lockdown. I will carry you in my heart, forever. Thank you for everything, darling Lungs. pic.twitter.com/XexC1y1tC4

And he did it with eagerness and enthusiasm. The energy never waned. In a cruel twist of fate, on what would be one of his last shoots at Parliament, we filmed staff being screened for the virus that has claimed his life. #RIPLungile https://t.co/jofyfjeiqd

The ANC in Parliament said the coronavirus pandemic had robbed the media industry of one of its most dedicated cameramen, with ANC chief whip Pemmy Majodina saying Lungile will always be remembered for his work ethic and friendly personality.

Premier Alan Winde also shared his condolences after Lungile’s death, saying he regularly reported on provincial government events and was well respected and liked by his administration.

We were saddened to hear the news today of the passing of @eNCA cameraman Lungile Tom. Lungile regularly attended WC Gov events to report on them & was well respected & liked by the WC cabinet & the entire communications team. We send our condolences to his family & colleagues. pic.twitter.com/Bf8MGmzhhJ

Nandipha said she was overwhelmed by the umpteen phone calls and messages she received after her husband’s death.

“I had no idea just how loved he was. He wasn’t the kind of person that held himself in higher regard than others. He was a friendly soul and had a good heart.