It was not the Zagreb Summit anyone had envisioned.

The presidents of the EU institutions, along with 25 of the bloc’s 27 national leaders, convened via videoconference late Wednesday afternoon for a summit with their Western Balkan counterparts that had been scheduled to take place in the Croatian capital, and was intended as the crowning moment of Croatia’s first-ever presidency of the Council of the EU.

But with Europe still reeling from the coronavirus, the six Balkan countries at various points on the real or aspirational path to EU membership — Albania, Bosnia and Herzegovina, Kosovo, Montenegro, North Macedonia and Serbia — had to make do with a show of support that was virtual, both physically and in some senses politically as well.

The formal summit declaration made no mention of the EU’s decision in March to begin membership talks with Albania and North Macedonia — by far the most significant development related to the region. That was due to the wariness of some EU countries toward the whole idea of further enlarging the bloc.

And while officially a top goal of the event was for EU leaders to voice “unequivocal support for the European perspective” of the region, those same leaders were also looking for a clear signal that the Balkan nations are committed to looking west to Europe rather than east to Russia or China.

“These countries are in a way surrounded by the European Union. If we look at geography, there is nowhere else that they can go” — Croatian Prime Minister Andrej Plenković

Fittingly for the leader of a country that is an EU member but also a neighbor of the would-be members, the summit’s virtual host, Prime Minister Andrej Plenković, seemed the one person willing to say what needed to be said — for each side.

At a concluding news conference with European Council President Charles Michel and European Commission President Ursula von der Leyen, Plenković hailed the decision on Albania and North Macedonia, adding that from his country’s view at least, it had taken too long.

And he made sure that EU leaders heard that the Western Balkans is committed to the EU. “These countries are in a way surrounded by the European Union. If we look at geography, there is nowhere else that they can go,” he said.

North Macedonia’s Foreign Minister Nikola Dimitrov, meanwhile, summed up the mood of regional leaders. “The recommitment to the European perspective is welcome,” he told POLITICO. “We would have been even happier with a reference to enlargement or completion of the European Union. After all, the Council took a decision to start accession talks.”

But, he stressed, “under the circumstances, where everyone is 100 percent focused on the coronavirus, it’s a good sign that Europe still got together and focused on the region.”

Here are four takeaways from the virtual summit:

1. It’s all about perspective — again

Due to the differences among EU members over enlargement, Western Balkan leaders once again had to make do with a commitment to a “European perspective” for the region.

In a classic Brussels compromise, the prospect of membership was alluded to indirectly — with a reference to a declaration from a 2003 Thessaloniki summit which stated unambiguously: “The future of the Balkans is within the European Union.”

EU diplomats stress that even though Wednesday’s text shied away from saying so, things are moving ahead on the enlargement front. They point to the decision to open accession talks with North Macedonia and Albania and to the fact that next month the European Commission is expected to present the negotiating framework for both countries.

That doesn’t mean anyone will be joining any time soon, however. The accession process takes years and candidate countries need to jump through many hoops before they can be deemed ready.

2. Forget China, show us some love!

One of the most striking passages in the final declaration concerns EU assistance to the Western Balkans to tackle the coronavirus. The statement notes the EU has mobilized €3.3 billion to help the region and declares: “The fact that this support and cooperation goes far beyond what any other partner has provided to the region deserves public acknowledgement.”

The line reflects the fact that the EU is in competition for influence in the region with other powers. Translation, particularly for Serbian President Aleksandar Vučić: Quit flirting with China and Russia and show us some love.

In the early days of the epidemic, Vučić lashed out at what he said was a lack of assistance from the EU. “European solidarity does not exist,” he declared. “That was a fairy tale.”

Vučić also showed up at Belgrade airport to welcome a plane from China carrying a large shipment of medical supplies.

And he declared Chinese President Xi Jinping to be a “brother,” because the Chinese “are the only ones who can help us.”

The EU also scored a PR own goal by initially not exempting Western Balkan countries from export restrictions on medical protective equipment. That was later remedied.

EU diplomats admit there were some problems at first in getting and highlighting assistance to the region. But “it’s simply true that we are doing more than everyone else,” one of them stressed.

3. EU plays catch-up with US on Kosovo

The leaders stressed the importance of “good neighbourly relations” and touched upon the most difficult relationship in the region — between Belgrade and Pristina. Two decades after the war that ended Serb rule over Kosovo, Belgrade continues to regard the territory as a rebel province and does not recognize its 2008 declaration of independence.

The leaders welcomed the appointment last month of Miroslav Lajčák, a former foreign minister of Slovakia, as the EU’s special envoy for the stalled dialogue between Belgrade and Pristina. But the EU is playing catch-up in a contest with the United States. Last October, Donald Trump appointed Richard Grenell, his ambassador to Germany and now also acting director of national intelligence, to a similar role. Grenell has not been slow to make his mark, in controversial fashion.

Lajčák has his work cut out to play a leading role between the two sides, not just because of Grenell’s rival operation.

He struck a deal to resume flights between the two capitals — although critics questioned its viability. He also contributed to the fall of Kosovan Prime Minister Albin Kurti’s government, after publicly criticizing Kurti for not swiftly removing trade tariffs on goods from Serbia. Grenell has been accused by some Kosovan politicians of taking Serbia’s side and pushing for a peace deal as an election-year achievement for Trump. For his part, Grenell has denied supporting border change — a hugely sensitive issue in the region — as a way to get a deal.

Lajčák has his work cut out to play a leading role between the two sides, not just because of Grenell’s rival operation. Kosovo’s President Hashim Thaçi criticized Lajčák’s appointment even before it was announced, saying his mission was “designed to fail.” He said Lajčák had worked to stop Slovakia recognizing Kosovo and to prevent the country joining the U.N. cultural body, UNESCO.

EU foreign policy chief Josep Borrell did not make matters any easier by wading into the heated border debate on the eve of the summit, declaring he was not opposed to a change if both sides agreed. That statement brought swift condemnation from Kurti, who remains acting prime minister.

Being forced to hold a virtual summit may have been a bummer for Croatia but it was a political gift for Spanish Prime Minister Pedro Sánchez, who was able to avoid being in the same room as leaders from Kosovo, which Spain does not recognize as an independent country.

Even before it was clear the summit would not take place in Zagreb, Madrid had negotiated with the Croatian hosts over pre-conditions for participating in the event, which included no formal reference to “six” Balkan countries, but rather general references to the EU’s Balkan partners; no reference in the formal declaration to EU membership; and no introduction by title that would have bestowed official status or recognition and no display of flags.

Indeed, a glance at Sánchez’s tweet about the summit, or at his statement issued by the government, and it would be easy to jump to the conclusion that the meeting was mainly about helping the Balkan countries manage the coronavirus crisis. 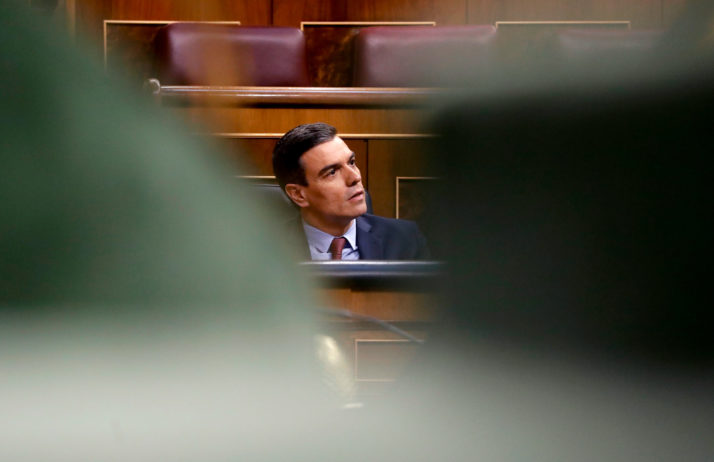 Spain’s hypersensitivity over Kosovo is tied to its own internal problem with Catalonia, where separatists have long voiced a desire to break away from Madrid.

Sánchez’s predecessor, Mariano Rajoy, skipped most of a similar EU-Western Balkans summit in Sofia, Bulgaria in 2018 for the same reason. He attended a dinner the night before, but didn’t turn up for the actual summit meetings.

Spain has also opposed allowing Kosovo to join international organizations or even the Eurovision Song Contest because it might be seen as official recognition. Instead, Madrid has insisted that Kosovo must work out an agreement with Serbia — a point that Sánchez reiterated in his statement Wednesday evening, expressing support for the Belgrade-Pristina dialogue and praising the EU’s designation of its special representative to help resolve the dispute.

Sánchez said that Spain “encourages both parties to make progress aimed at achieving a consensual and lasting solution.” And luckily for the prime minister, he didn’t have to deliver that message in person.

Cristina Gallardo contributed to this article.